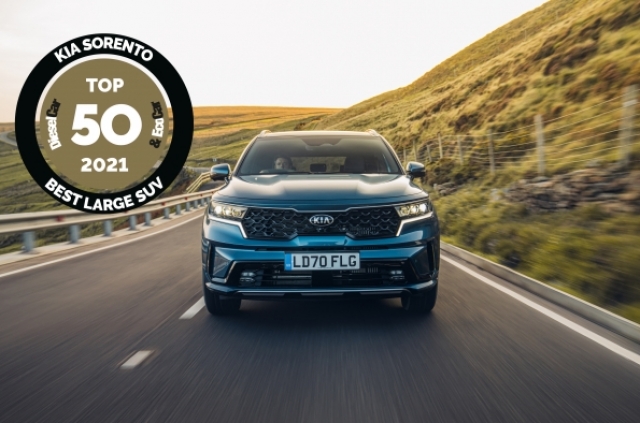 Diesel Car & Eco Car magazine has named the all-new Kia Sorento as ‘Best Large SUV’ in its annual Top 50 list. The model placed 19th overall in the 2021 rankings, and was the standout large SUV, taking home the best-in-class accolade.

Not only did the Sorento impress judges, but the Sportage, Ceed and Niro also landed spots on the list, placing 27th, 32nd and 39th respectively.

The all-new Sorento was launched in late 2020 and is available with a choice of powertrains to suit all customer needs, including Hybrid, Plug-in Hybrid and Diesel. Consistently praised for its immense practicality and space for seven occupants as standard, the Sorento ticks all the boxes a large SUV should.

“The Sorento is loaded with features, from its slick 10.25-inch touchscreen to air-conditioning for all seven occupants. To cap it off, the Sorento can tow 2,500kg and comes with a seven-year warranty.”

The Kia Sportage was praised for being a “simply fantastic all-rounder and family car”, thanks to its spacious interior, boot capacity and commanding driving position. Not only that, judges noted the car’s high standard specification even in ‘2’ grade trim with the Sportage benefiting from 48-volt mild-hybrid technology as standard for its 1.6-litre CRDi diesel, boosting fuel-efficiency.

In addition, the Diesel Car & Eco Car judges pointed out that the Ceed scored higher in the list than its respective class rivals. Robertson commented that the Ceed is, “Stylish inside and out, and now comes with desirable mild hybrid diesel engines. The chassis is planted, and various driving modes help tailor the driving experience for comfort or a more sporting feel.”

The Niro continued its recognition within the Top 50 list having previously been voted as ‘Best Hybrid’ in 2018. The Niro was praised for its fashionable SUV silhouette and choice of electrified powertrains, as well as recent updates that see the car keenly priced including the fully electric e-Niro.

Paul Philpott, President & CEO of Kia UK Limited commented: “I’m extremely proud to see four Kia models in the Top 50, and the Sorento’s award-win is testament to how well our range topping SUV has been received. With the recent addition of plug-in power to the Sorento’s engine line-up it exceeds the needs of even more customers. This win, alongside the four different cars featured on the list, further emphasises Kia’s ability to cater for our customers’ ever-changing needs.”